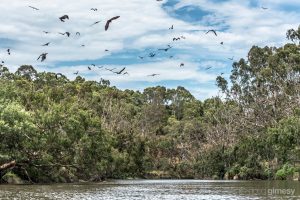 While bats, in particular flying-foxes, are a crucial species for ecological processes in subtropical and tropical ecosystems of Australia, they have also been a prolonged source of human-wildlife conflict. Flying-foxes are classified as a keystone species, given their role as pollinators and seed dispersers for tropical and subtropical ecosystems, yet the public perception of them is broadly negative. This is predominantly due to concerns about the impact on people’s loss of amenity and the potential for zoonotic diseases. The public perception of bats is typically influenced by age, gender and media representation. Furthermore, when the media represents bats as the antagonist, people’s perception and attitude towards them becomes prejudiced and as such, the representation of the species in a negative light has adverse repercussions on their conservation.

The negative impacts of human-bat conflicts is related to proximity and shared living space. Escalation of human-bat conflicts has been attributed to this limited space and competition for resources as both humans and wildlife encroach on each other’s territories. This increasing proximity has significant consequences, not only to human health, safety and welfare but also to biodiversity and ecosystem health.

As a consequence of these impacts, humans may take retaliatory actions towards the wildlife which can further escalate the conflict, leading to extreme measures such as further habitat removal, colony disturbances, removal of roost trees, colony dispersals, revengeful killings or inhumane trapping or poisoning. Given that change of natural environments to accommodate human growth and livelihood is a primary driver of human-bat conflicts, these interactions are likely to continue into the future.