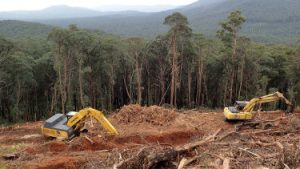 As the human population continues to increase, so does the impacts of land clearing, which results in large scale habitat loss and habitat fragmentation for many wildlife species. Over 2,000 mammalian species are already negatively impacted by current land clearing practices and policies, highlighting the threat to wildlife species.

Australia is among the worst 11 countries for deforestation, according to WWF Living Planet Report 2018 (click here for the report), making Australia the worst deforestation country in the developed world with the land predominantly being cleared for agricultural purposes. Queensland is the worst state for deforestation clearing 395,000 hectares of native vegetation alone between 2015-2016; approximately the size of Sydney or Melbourne. This equates to 1,500 football fields of vegetation being cleared per day. It is estimated that 45 million animals were killed during these years as a result of this deforestation. From 2010 to 2016 the annual rate of land clearing exponentially increased by 330% from 92,000 to 395,000 hectares (approximately 400 million trees) being cleared per year, and is still accelerating. Other states are also increasing their land clearing with devastating impacts on wildlife and the loss of so many native food trees for flying-foxes.

As well as Australia’s land clearing practices, wildlife also has to contend with large scale severe bush fires destroying habitat and killing most of the wildlife. During the 2019-2020 bush fire season millions of hectares were burnt throughout the country and over half a billion animals were killed or displaced.
For more information please read:

How you can help: