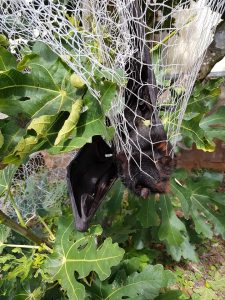 Large scale habitat clearing has eliminated much of flying-foxes’ natural food sources. This has resulted in greater numbers of flying-foxes in urban areas that depend on flowering and fruiting trees in people’s gardens. To protect their trees from wildlife, many people use anti-bird netting over their trees. The wrong type of netting can be deadly to flying-foxes foraging for food as they become caught in the netting.

The netting can cause significant damage as it restricts blood flow to the wing membrane. Too often trees are not checked on a regular basis which results in trapped wildlife being left for days to die a slow cruel death in the netting. Call a wildlife organization as a matter of urgency.

Using the right type of netting can eliminate this risk and protect the fruit. If the netting mesh size is greater than 5mm square bats can get parts of their wings and feet caught in the mesh and become further tangled as they struggle to free themselves.