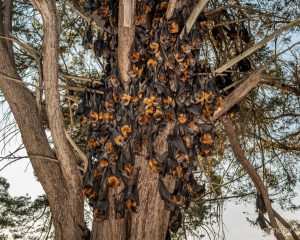 Climate change is an undeniable fact. In Australia we are seeing the effects of climate change with more frequent and severe droughts, heat waves and devastating fires. This is dramatically changing the Australian landscape and biodiversity.

Flying-foxes are often referred to as the canary in the coal mine and in the last few years Australia has seen mass casualties as thousands drop from trees during intense heat waves and starvation events. These apocalyptic events are brought about by the change in climate which is resulting in longer and more intense heat waves and longer droughts that impact the flying-foxes’ natural food source as native plants are not flowering and producing pollen.

The following is a list of mass death in the last 15 years.

For further information on heat events:

Journal article on climate change and the effects of temperature extremes on Australian flying-foxes:
https://www.ncbi.nlm.nih.gov/pmc/articles/PMC2596826/

How you can help: