Why bats are important

All bats are important in our environment and they all fill critical niches that have evolved over millions of years. Bats display an abundant diversity of dietary practices, varying from species which feed on insects and small fish to species which feed on fruit, nectar and pollen. Each of these species provides beneficial ecosystem services as either primary, secondary, or tertiary consumers, which subsequently assists and supports the health of ecosystems.

Importance of flying-foxes (sometimes referred to as fruit bats) 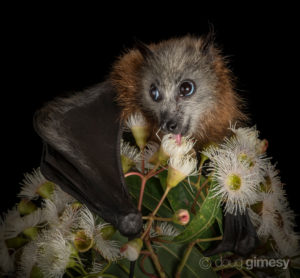 Flying-foxes are Australia’s only nocturnal, long distance pollinators and seed dispersers of native forests and cultivated plants, and also the most efficient pollinators and seed dispersers of native Australian forest trees. Flying-foxes are fundamental to the preservation of forest diversity through their transportation and relocation of seeds across different ecosystems. This is achieved by the flying-foxes in a number of ways: by carrying the fruit away and unintentionally dropping it; by carrying the fruit away, consuming the flesh and spitting out the seeds; or eating the fruit and seeds, digesting the seeds then defecating them out 12-34 minutes later. In this way they are able to disperse seeds in previously disturbed landscapes and to aid in pollination thus ensuring genetic diversity.

Flying-fox species such as Black and Grey-headed flying-foxes are crucial for the pollination and seed dispersal of eastern and northern Australian eucalypt forests, delivering long distance pollination and seed dispersal over vast distances as they fly between food sources. This is achieved by collecting significant amounts of pollen on their fur and whiskers as they move amongst the flowers of Eucalypts or Melaleuca is search of nectar. This pollen is then transported to the next tree which may be several kilometres away and deposited on the flower’s stigma. This type of pollination is referred to as cross-pollination and is essential for eucalypt species.

It is these ecosystem services that flying-foxes provide which make them Australia’s secret weapon against climate change and they will play a critical role in helping restore the land destroyed by the 2019/2020 bush fires.

Microbats are an important element of native mammal assemblage in all regions of Australia. They play a critical role in ecosystems as insectivores and a prey species for other animals such as owls and snakes. Though most importantly their position at high trophic levels, widespread distribution and evolutionary stability make them bioindicators of ecosystem health. Thus, the rapid decline of many microbat species across Australia does not bode well for Australia’s ecosystems.

Microbats play an important role in controlling insect numbers, including a range of pest species and disease carrying mosquitoes, by eating around 40% of their body weight of insects each night. That is the equivalent of an average human that weighs 70kg eating 117 Big Macs each night. Consumption of this volume of insects is expected to affect population sizes of invertebrate prey species, with benefits to the health of trees, pastures, crops and revegetated areas. There is also increasing evidence of the economic value of microbats for agricultural production, with significant evidence that bats praying on insect herbivores has resulted in significantly increased crop yields and reduction in chemical pesticide costs.

Due to microbats’ small size, nocturnal behaviour and cryptic roosting habits, they are rarely seen by landholders or the general public and frequently overlooked in biodiversity assessments and fragmentation research. Additionally, they are often portrayed negatively in the media and associated with horror themes such as Dracula. Unfortunately, all these elements detract from microbats’ ecological importance and negatively impact their conservation.